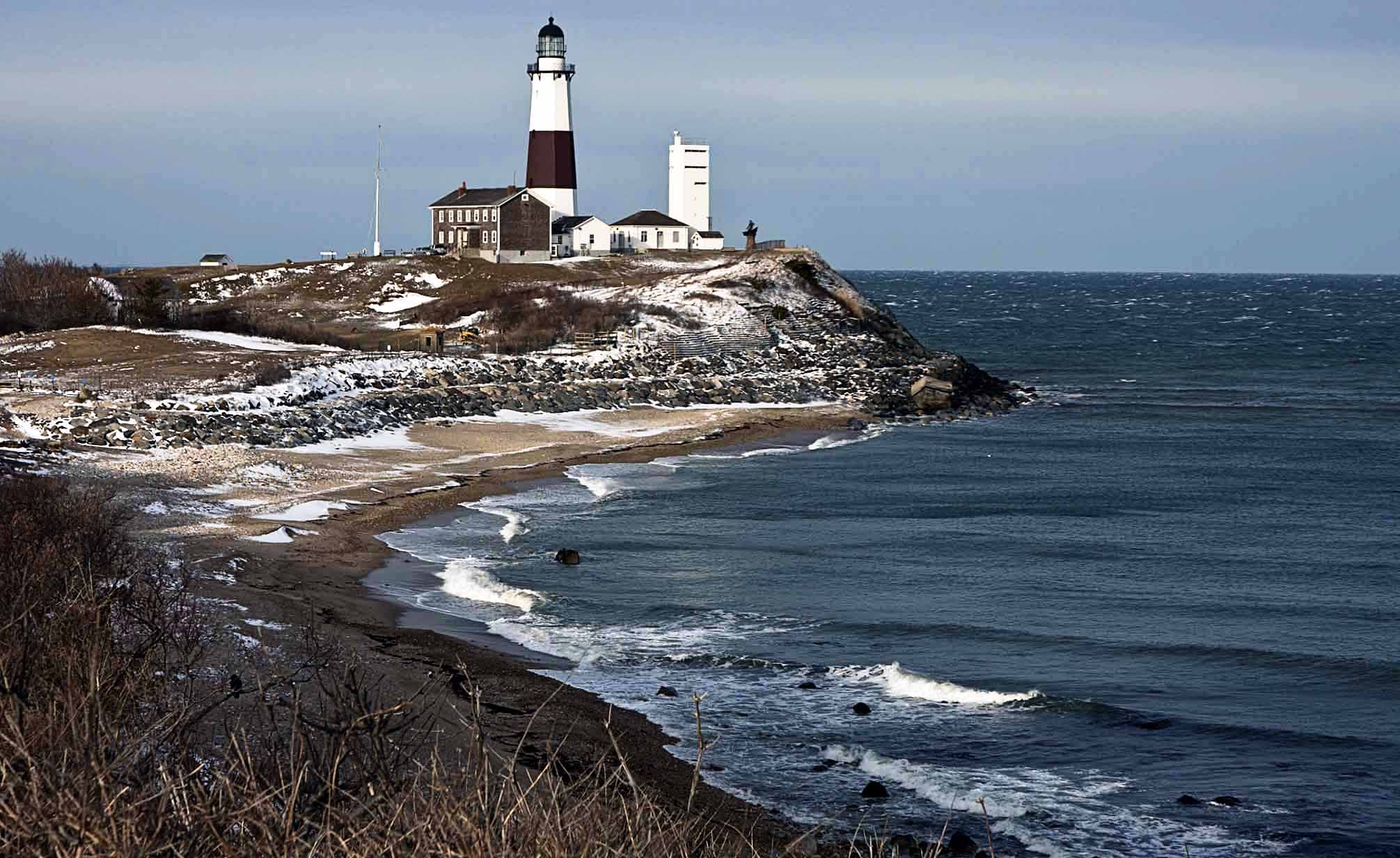 15 Things You Can Do During the Winter In The Hamptons

The arrival of winter doesn't mean the end of fun when you're in the Hamptons.

Although the Hamptons are mostly populated in the summertime, the East End – notorious for its long stretches of beaches with white sand – attract plenty of people during the winter months, too.

During this period, the traffic isn't as hectic, hotel rates are relatively inexpensive, and reservations are much easier to make. If you can't enjoy a walk on the Hamptons' famed beaches (assuming you don't want to be near the water in the winter), what can you do here at this time of the year?

Celebrities and everyday people like you and me come to the Hamptons in the wintertime from places like New York City for a weekend getaway of sorts. Here are some of the things they engage in when the beaches are covered up by snow.

1. Book a Room at the Maidstone Hotel and Curl Up Beside the Fireplace

This is a quaint hotel. It only has sixteen rooms, in addition to three cottages. It is the perfect place if you are in search of a homely environment during the colder seasons.

The hotel's design concept is called "Scandinavian Cozy." The actual building resembles somebody's personal residence. Staff members encourage patrons to treat common areas as if they were in their own house.

The Maidstone Hotel is decorated with vibrant Josef Frank-style patterns, plants, and sheep hides. There are plenty of books on the coffee table that you can pick up and read beside the fireplace. Also, inside of the hotel there's a restaurant where you can feast on Swedish–American dishes.

Their most popular dish is the Swedish meatballs, though the fresh pies they bake each day will be hard to turn down.

For an admission fee of $12, adults can tour one of New York State's oldest lighthouses. Built in 1796, the Secretary of the Interior recognized the Montauk Lighthouse as a National Historic Landmark in 2012.

Its "keepers" were the American Coast Guard and Lighthouse Service up until the place became automated in the late 80s.

When the Montauk Lighthouse opens up during colder seasons, opening hours are seasonal. If you plan on visiting the lighthouse, check its website to make sure you can actually enter it.

3. Take It Easy at the Infamous Inn at Windmill Lane

You won't need to leave your private room at this inn if you don't want to. It provides patrons with a few different state packages, each of which comes with a unique ambiance.

There are seven main house suites (Suite 1 is a duplex that includes a double shower and massive soaking tub); 3 cottages (each of which has one bedroom); and a luxury farmhouse with four bedrooms called the "21 House."

At one time, the Inn at Windmill Lane was fairly low-key. In 2009, the property received an upgrade and was converted into a getaway for anybody interested in winter retreats. The fireplaces are double-sided. The artwork here is from the private collection of the owner. This homey inn is super comfortable and ultra-luxe.

They have a concierge service that does everything from chauffeur you around in an SUV to stock your fridge with selected gourmet groceries. They can even deliver meals made by a nearby restaurant (in such cases, your food will be served on a plate with linens beside it in the private dining room).

4. Taste Wine at the Wölffer Estate

Novices and connoisseurs of wine will appreciate the experience provided by the Wölffer Estate.

This American winery offers classic wine tasting events with a European twist. While they are renowned for the summer rose, this place has a vineyard offering other red wines perfect for colder months.

Patrons have the option to participate in an event called "Candlelight Fridays," which takes place from approximately 5 PM to 8 PM. Live music is played during this time, and wines can be purchased either by the bottle or glass (the wine will be paired with charcuterie and cheese).

You will need to make arrangements in advance if you are interested in touring the property or snagging a table.

5. Shucking and sampling at the Widow's Hole Oyster Farm

As far as eating oysters go, colder months will be the best time to feast on them. Shellfish aficionados everywhere will tell you that oysters have the best taste during the winter.

Those who visit this Greenpoint village (situated near North Fork, which is close to the Hamptons either by car or train) will be able to tour the farm, learn how oysters grow, shuck oysters, and walk through the nursery.

Of course, you will be able to sample some oysters, too.

6. Get into the spirit of the Holidays at the Gingerbread University

Are you visiting the Hamptons during the holidays with kids? Then a trip to the Gingerbread University will be a must.

You can attend a decorating session that lasts about an hour, and add candy and icing to gingerbread items as you see fit.

There are ginger elves to assist your family as they make sugar-filled creations. Reservations aren't required, but are encouraged.

If hanging out with celebrities is something that interests you, you'll be able to do such mingling at Nick & Toni's.

This East Hamptons-based eatery resembles a rustic type of farmhouse. Its menu is full of Mediterranean dishes, and the ingredients are derived from local fishermen and farmers.

It is a lot easier to book a reservation during colder seasons, and you might even spot a celebrity or two when you visit the place.

Though the area isn't an art mecca, the East End is where the Parrish Art Museum is situated.

You'll be able to browse 3000 multimedia pieces, paintings, and sculptures inside of an exhibition space 12,000 ft.² large.

The museum takes up 14 acres worth of Long Island's Meadow. You'll be able to explore submissions from painters, sculptors, photographers, and other local artists.

9. Check out a Performance from the Nancy Atlas Project

Be sure to catch the Nancy Atlas Project performance while in the East End. Stephen Talkhouse is a bar in Amagansett, where Paul Simon and Jimmy Buffett have both performed.

Atlas is known for a mix of both covers and original songs. Her family-friendly performances draw eclectic crowds that often wind up dancing.

Her primary audience is mostly comprised of visitors who are fans and locals.

10. Shop for Brand-Name Clothing at Tenet

The lack of shoppers in the wintertime causes most restaurants and hotels in the Hamptons to shut down for the season.

For anyone looking to score some deals, though, this period is the best time to find them. A lot of the East End's stores reduce their prices for the sake of moving inventory out before new merchandise arrives for the summer.

If you happen to be in search of something different – perhaps Calypso and Intermix – then check out Tenet – a staple for regulars in the Hamptons. It is situated on Southampton's Main Street.

The founder visits Paris twice a year to see new fashion releases before the competition does.

The Buckskill Winter Club's outdoor ice rink is about the same size as an official NHL rink. It isn't necessary to be either a professional ice skater or a hockey player to enjoy yourself here, though.

This family-friendly winter club offers private lessons for those who don't know how to skate. The public can go skating as they see fit.

Regulars can partake in adult and junior hockey leagues, while youngsters can participate in hockey classes or figure skating lessons.

The Buckskill Winter Club has a snack bar in their clubhouse. You can expect to pay between $7 and $27 to go ice skating here, based on the skater's age and the time of day. Adults can expect to pay $9 to rent a pair of skates.

12. Go Wining and Dining at the Infamous American Hotel

This stately hotel always gathers a crowd. Guests can reserve a table and have dinner near the Steinway.

They can also buy a cigar and stroll along Main Street in Sag Harbor. You always find somebody interesting to look at near the American Hotel's porch or dining area, particularly during the summertime.

While there are only eight rooms in the hotel, there are plenty of vacancies during the colder seasons. The American Hotel's origins can be traced to the 1840's whaling era. Spending some time in this historic place can be educational. The American Hotel is situated in the East End.

This small trattoria is situated on Sag Harbor's Bay Street in the East End. Places like this make Long Island resemble the Upper East Side.

You will find an outdoor garden that is quite charming in the spring and summer months. During the wintertime, the rooms in this place are intimate and cozy.

There are two locations: one in Sag Harbor and the other in the East Hamptons.

14. Listen to Live Music at One of the Hampton's Staples – Baron's Cove

This Sag Harbor venue was renovated in 2015. In the summertime, Baron's Cove is the place to be when you're in the Hamptons.

That is because it offers a stunning view of Sag Harbor and hosts a pool. There are plenty of things to do in the wintertime, too. The amount of guestrooms in this spacious place totals 67, each of which have living room spaces and a nautical ambiance.

The lounge and bar area was designed to be enjoyed all year round. Winter patrons will appreciate the homey fireplace (which is wood-burning).

This spot is popular for locals and visitors, and always garners a crowd. As such, getting there early is worthwhile if you want to score a seat. The wine and cocktail lists here are just as impressive.

On weekends, you will hear live musical performances. Baron's Cove also has a restaurant you can have dinner at. The chef obtains ingredients from fisheries and farmers in the area (including Peconic Gold Oysters, Mecox Bay Dairy, and the North Fork Egg Farm).

Schedule a trail at the East Hampton Trails Preservation Society and discover all the treasures of East Hampton. Walk along the bay and harbors while enjoying the view with someone you love.

There are plenty of options to choose from in the winter time to keep the fun happening in the Hamptons. Be sure to check out one some (or all!) of the places listed to enrich your Hamptons experience this season.

Also, if you're looking for the best coffee shops in town while you're enjoying your stay, check out our post "The 5 Best Hamptons Coffee Shops That You Have to Visit". 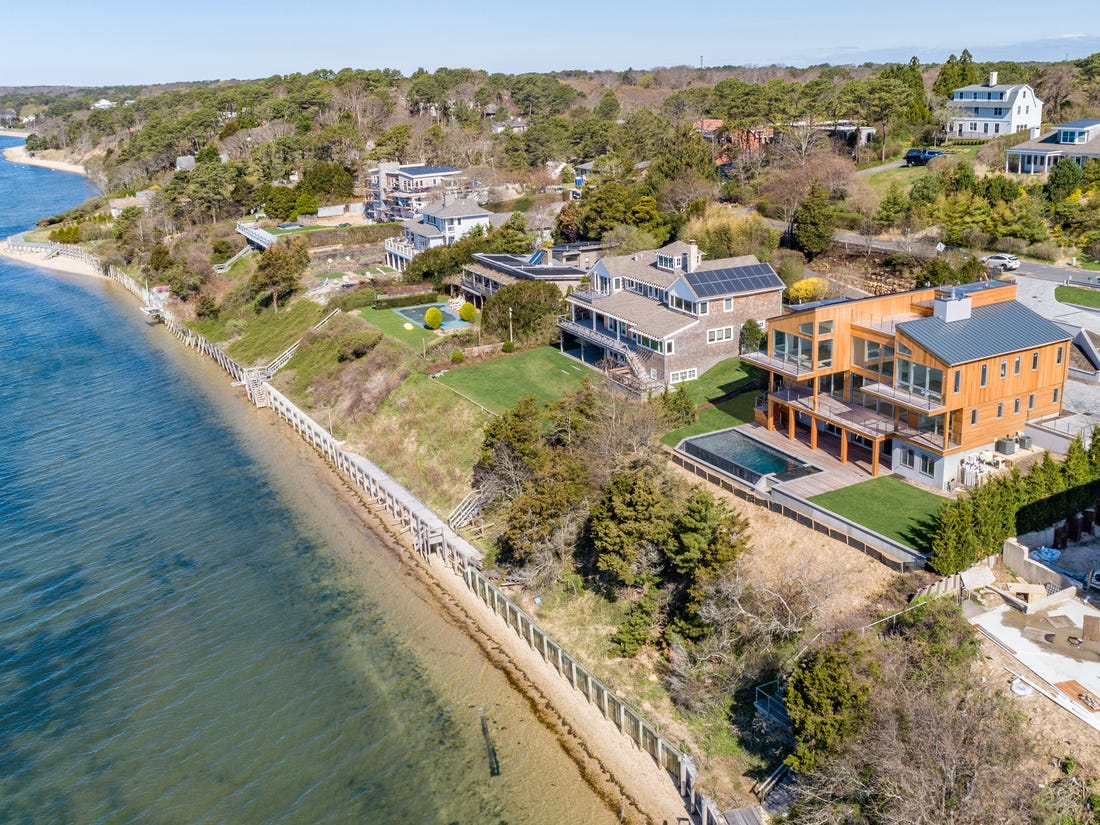 A Homebuyer's Guide to Hamptons Neighborhoods 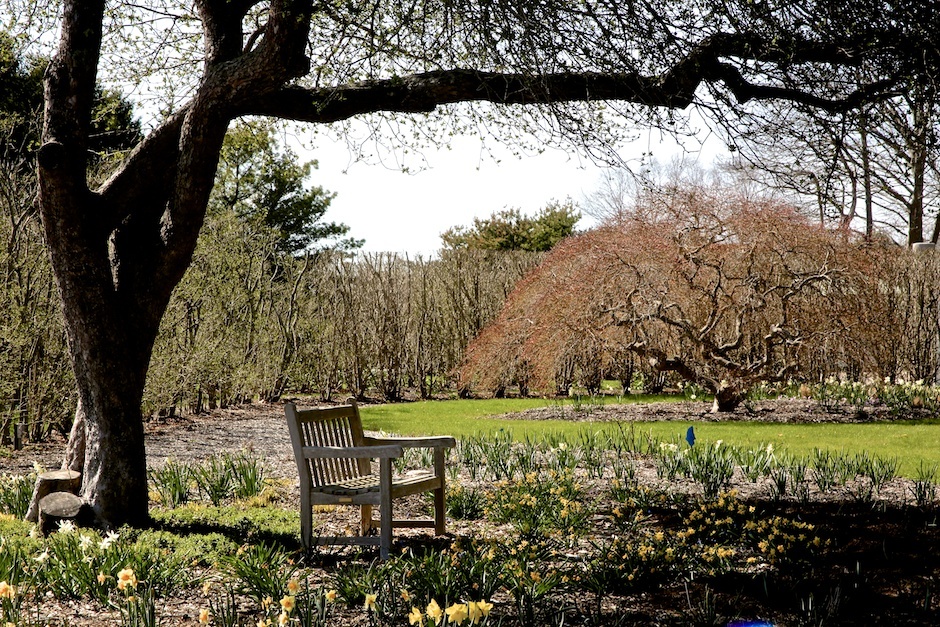 A local’s guide to Bridgehampton, NY 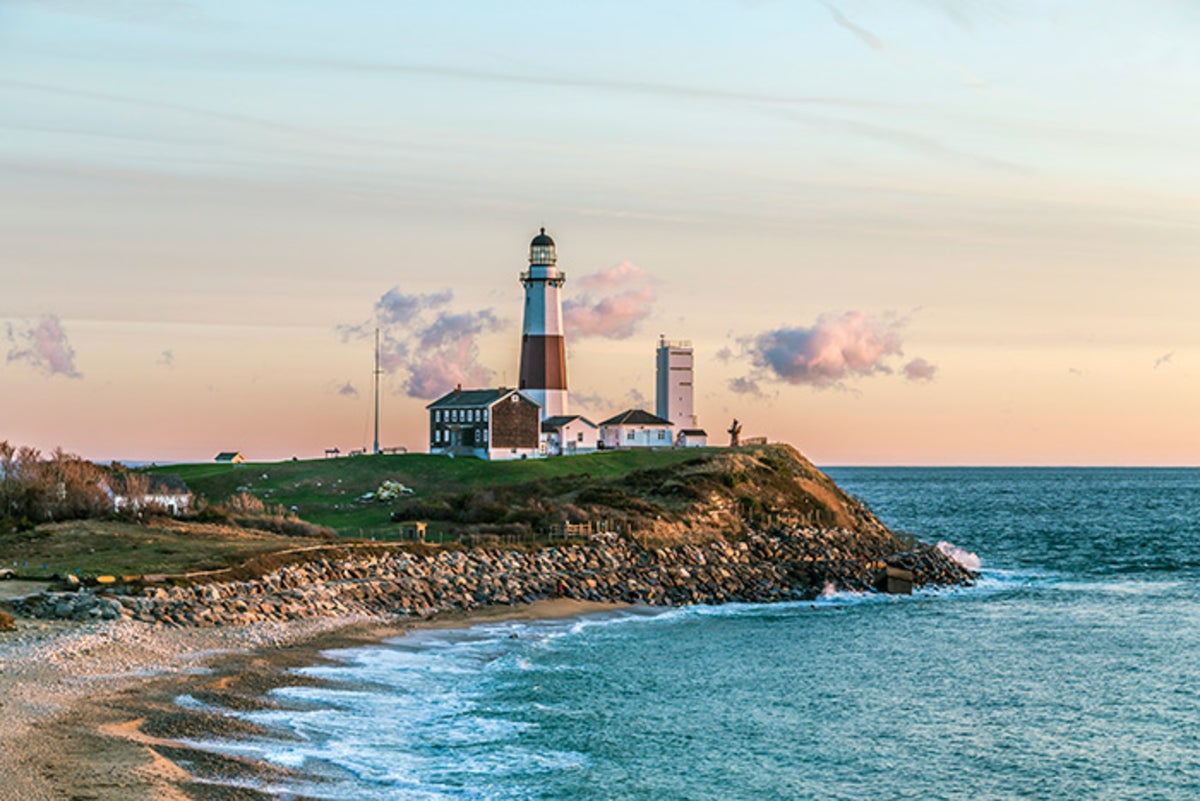 Enter your email address below to subscribe to our monthly newsletter.
Thank you! You have been subscribed to our blog.
Oops! Something went wrong while submitting the form.